LED PCB assembly Refers to the assembly of LED chips on the PCB board, and because its shape resembles a strap, it is called an LED hard light bar.

Assembly form: LED rigid light bar adopts PCB as the circuit board, uses LED patch to assemble, or uses in-line assembly, there is a difference between the two: the patch is more stable, not easy to fall off, to ensure that the LED chip can be normal It is simple and convenient to use, but the arrangement is not very neat and easy to fall off, causing damage to the chip. 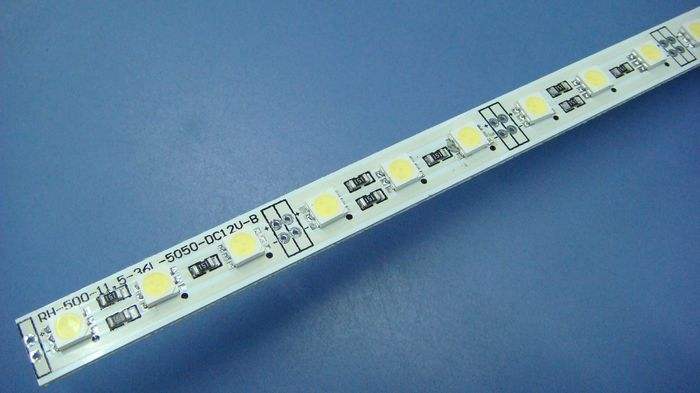 5. A wide range of adaptation, the corresponding LED light bar can be used indoors and outdoors.

6. The installation and construction are convenient, but the disadvantage is that the LED hard light bar cannot be bent at will.

There are two kinds of flexible LED PCB light bars and Rigid LED light bars, the differences are as follows:

1. The flexible LED light bar adopts FPC as the circuit board and is used for assembly, so that the thickness of the product is only the thickness of a coin and does not occupy space; the general specifications are 18 LEDs with a length of 30 cm, 24 LEDs and 15 with a length of 50 cm LED, 24 LEDs, 30 LEDs, etc. There are also 60cm, 80cm, etc., different users have different specifications. And it can be cut at will, or it can be extended arbitrarily without affecting the light emission. The FPC material is soft, can be bent, folded, and wound arbitrarily, and can move and stretch freely in three-dimensional space without breaking. It is suitable for use in irregular places and narrow spaces, and because it can be bent and wound arbitrarily, it is suitable for arbitrarily combining various patterns in it.

2. The LED hard light bar is assembled with PCB rigid board. The LED is assembled with SMD LEDs and it is also assembled with in-line LEDs. Different components are used according to different needs. The advantage of the rigid light bar is that it is easier to fix, and it is more convenient to process and install; the disadvantage is that it cannot be bent at will and is not suitable for irregular places. SMD LEDs for rigid light bars have 18 LEDs, 24 LEDs, 30 LEDs, 36 LEDs, 40 LEDs and many other specifications; 18 LEDs, 24 LEDs, 36 LEDs and 48 LEDs are used Different specifications, there are front and side.